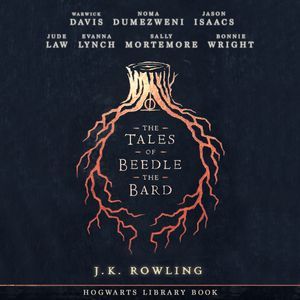 The Tales of Beedle the Bard

Performed by talented actors from across the Wizarding World, this is the first ever audiobook edition of The Tales of Beedle the Bard, which was originally written in 2007 by J.K. Rowling and has raised money for her children's charity Lumos ever since.

As familiar to Hogwarts students as Cinderella and Sleeping Beauty are to Muggle children, Beedle's stories are a collection of popular fairy tales written for young witches and wizards. So, if you're wondering what's in store in this brand-new audio edition... well, your ears are in for a treat.

Once you've checked this fabulous Hogwarts Library book out, you'll start by hearing the author's introduction, read by Sally Mortemore (librarian Madam Pince from the Harry Potter films). Then it's time for the tales to begin...

You'll laugh along to The Wizard and the Hopping Pot as you listen to the havoc wreaked by a father's impish gift to his son, read by Warwick Davis (Professor Flitwick - Harry Potter films).

The Fountain of Fair Fortune will take you on a quest through an enchanted garden, alongside three witches and a luckless knight, read by Evanna Lynch (Luna Lovegood - Harry Potter films).

In The Warlock's Hairy Heart, you'll be warned about a young warlock who is fearful of love, and turns to dark magic to avoid it at all costs, read by Jason Isaacs (Lucius Malfoy - Harry Potter films).

The calamitous meeting of a foolish king, a cunning charlatan and a mischievous washerwoman unravels in Babbitty Rabbitty and her Cackling Stump, read by Bonnie Wright (Ginny Weasley - Harry Potter).

And finally, the most iconic of Beedle's stories. The Tale of the Three Brothers - with its message of humility and wisdom - will introduce you, dear listener, to the Deathly Hallows, read by Noma Dumezweni (Hermione Granger - Harry Potter and the Cursed Child, London's West End and New York's Broadway).

Each of the tales is accompanied by wise and whimsical notes from a certain Albus Dumbledore, surely everyone's favourite headmaster, read by Jude Law (Albus Dumbledore - Fantastic Beasts films).

We're told these five fables have been firm favourites in wizarding households for centuries, and now it's your turn to experience these tales from the Wizarding World, as you've never heard them before. 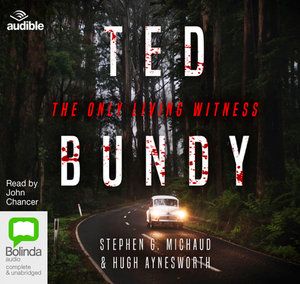 Ted Bundy : The Only Living Witness is the definitive account of America’s most notorious criminal, as told by the people who knew him best.

Two journalists with unprecedented direct access speak to Ted Bundy and those closest to him – friends and family.

What follows is a candid and chilling full account of the life and crimes of the most notorious serial killer in history.

What Bundy had to say in more than 150 hours of face-to-face interviews is as relevant today as it was at the time. 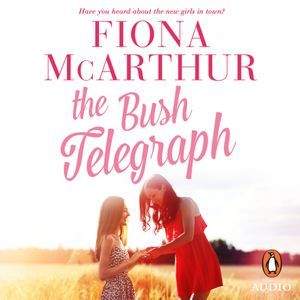 'Small towns and gossip go together like trees and birds.'

It's been more than ten years since Maddy Locke left Spinifex, the small outback town where she gave birth to her daughter, Bridget. Now she's back to prove she's got what it takes to run the medical centre and face the memories of that challenging time in her life. But everything's changed - the old pub is gone, her new colleagues aren't pleased to see her, and it's drier and hotter than ever.

Station owner, Connor Fairhall, thought he'd left the drama behind in Sydney, but moving back to Spinifex with his rebellious son, Jayden, hasn't been the fresh start he'd envisioned. His brother, Kyle, is drinking too much and the only bright spot on the horizon is meeting Nurse Maddy, who's breathing new life into the weary town up the road, little by little.

Can Maddy ignore the rumours about Connor and risk her heart again? Or will the bush telegraph spread along the wire fences and stand in the way of trust? 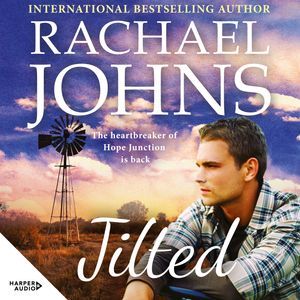 After more than ten years away, Australian soap star Ellie Hughes returns to the small country town of Hope Junction, determined to remain anonymous while caring for her injured godmother, Matilda.

But word spreads fast in the tight-knit community. It isn't long before the people of Hope are gossiping about the real reason for Ellie's visit and why she broke the heart of golden boy Flynn Quartermaine all those years ago.

Soon Ellie and Flynn are thrown back together again, forced to deal with the unresolved emotions between them. For Ellie is not the only one with secrets. Flynn has his own demons to battle, and Matilda is hiding something from her much-loved goddaughter.

When all is uncovered, can the ill-fated lovers overcome the wounds of their past? Or is Flynn destined to be jilted again? 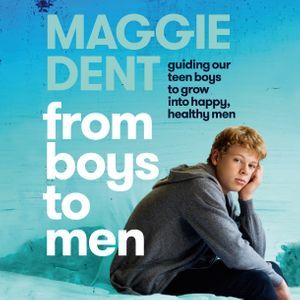 From Boys to Men

One of Australia's favourite boy experts on how to help teen boys to develop into good men.

For boys, adolescence can be a confusing minefield and parents are often bewildered as to how to best guide their precious sons.

Many parents wake one day to find that their beautiful little boys have grown into silent, withdrawn, sometimes angry and often unmotivated tweens and teens.

Well-known Australian author, parenting and resilience educator, and one of Australia's favourite boy experts Maggie Dent, offers parents and guardians a compassionate and practical guidebook, packed with advice and ground-breaking techniques on how to stay calm and:

- Communicate effectively to defuse conflict
- 'Unstick' an unmotivated son
- Teach them to cope with loss and failure, and how to recover
- Help them foster healthy friendships and intimate relationships
- Navigate technology and the digital world.

From Boys to Men empowers parents with insights, tips and a common-sense approach to help all boys - and their families - thrive as they progress through adolescence, offering hope for a future of adventure, stability, engagement and connection.

The compulsive conclusion to the Dragon Empire trilogy from sci-fi superstar Kylie Chan.

Life seems settled for Jian in the Dragon Empire. She's comfortable in her position as Captain of the Imperial Guard and content with her unusual domestic arrangements.

But when trouble stirs at the edge of the Empire, they discover that the Cat Republic has been hiding a powerful and dangerous force that could destroy everything the Empire represents. Jian and her family must work together to save the Empire - and travel further than any dragon has ever gone. 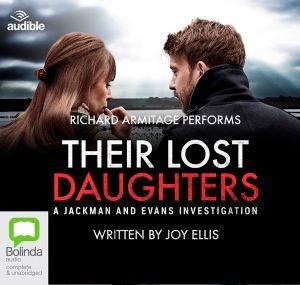 Deep in the muddy fields of the Lincolnshire Fens, a teenage girl is found wandering, delirious, claiming to have been drugged at a party. Metres away, the drowned body of another girl is found on an isolated beach. And all this on a small stretch of land where, nearly 10 years ago, the shocking disappearance of a young girl remains an open case.

For DI Rowan Jackman and DS Marie Evans, the pressure is on to bring the perpetrators of these shocking crimes to justice. Are the crimes linked? Who are these young girls? And what on earth is going on under the green and pastured land of the Lincolnshire Fens? 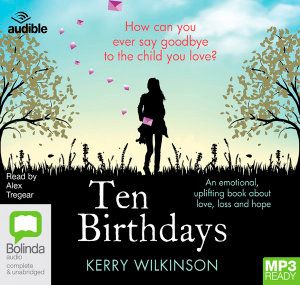 There are going to be so many things I wish I could've told you in person, Poppy. I won't get the chance to do that, so perhaps this is my only way ...

It's Poppy Kinsey's birthday. She should be blowing out candles and opening presents, but hers falls on the type of heart-wrenching, agonising anniversary she would far rather forget. The worst day of them all. The day her mother died.

But this year is special because the person she misses most in the world has left her a set of letters, one for each of her next 10 birthdays. As Poppy opens them year by year, she discovers that no matter how tough life gets, her mum will always be by her side, guiding her along the way. 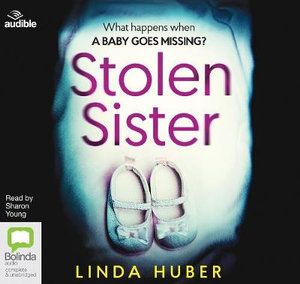 What happens when a baby goes missing?

Twenty-two years ago, Erin and Vicky's parents were killed in an explosion. Now grown up, Erin and Vicky - who have been separated - are unaware they are siblings. But when Vicky is called to her great-aunt's deathbed, she learns that she isn't alone after all.

But where is Erin? Vicky's search begins ...

Elsewhere, Christine has problems of her own. In the first week of her new job, she makes a disturbing discovery and is struggling to come to terms with impending motherhood.

Vicky is almost ready to give up her search when an old foster mother calls with shocking news.

What links Vicky and Christine? Will Vicky ever find her sister? And can Christine's baby escape the past that befell her mother?

Who gave Jonathan Van Ness permission to be the radiant human he is today? No one, honey.

The truth is, it hasn't always been gorgeous for this beacon of positivity and joy.

Before he stole our hearts as the grooming and self-care expert on Netflix's hit show Queer Eye, Jonathan was growing up in a small Midwestern town that didn't understand why he was so...over the top. From choreographed carpet figure skating routines to the unavoidable fact that he was Just. So. Gay., Jonathan was an easy target and endured years of judgement, ridicule and trauma - yet none of it crushed his uniquely effervescent spirit.

Over the Top uncovers the pain and passion it took to end up becoming the model of self-love and acceptance that Jonathan is today. In this revelatory, raw, and rambunctious memoir, Jonathan shares never-before-told secrets and reveals sides of himself that the public has never seen. JVN fans may think they know the man behind the stiletto heels, the crop tops, and the iconic sayings, but there's much more to him than meets the Queer Eye.

You'll laugh, you'll cry, and you'll come away knowing that no matter how broken or lost you may be, you're a Kelly Clarkson song, you're strong, and you've got this.